PARIS, France – It's motor show week in Paris, and Jaguar – which launched the original XJ here in 1968 – is indulging in a little nostalgia to celebrate the 50th anniversary that event. In the half century since, it's become the brand's definitive model – as the Wrangler is to Jeep and the 911 is to Porsche. This sexy, curvaceous and unashamedly sporty sedan set the template for generations of XJs. And to get to the show, I'm going to drive examples of each on a roadtrip from Jaguar's home in Coventry and onward to Paris, via Goodwood and Le Mans. There's new product to enjoy along the way, too, in the shape of the celebratory XJ50 trim level created to mark the anniversary. But this is really a chance to explore Jaguar's past, and how previous XJs will inform the company's future. Respecting traditions without being chained to them is a recurring theme in the XJ story and one Jaguar has, at times, struggled with. Nobody understands this better than design boss Ian Callum, who says the original XJ inspired his dream to one day design cars for Jaguar. When his moment came, however, the opposing pressures of nostalgia and innovation became apparent. He recalls seeing the clay models for the circa 2002 XJ, code named X350, styling for which had already been signed off when he started. "I asked 'this is the new one?' because, to me, it looked just like the old version," he says with characteristic bluntness. Callum's chance to truly reinvent the XJ finally came in 2009 with the current model, a car that jolted Jaguar and its customers out of their comfortable slumber. "It's nearly 10 years old now but I still think it looks good – I'm very proud of what we did with that car," he says. 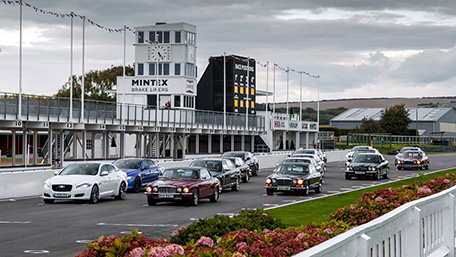 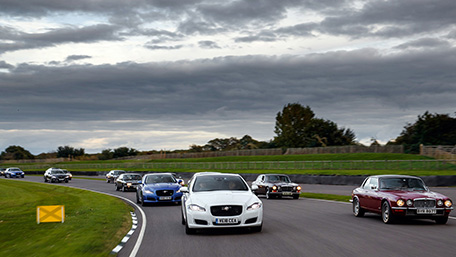 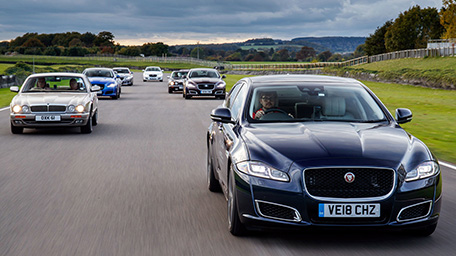 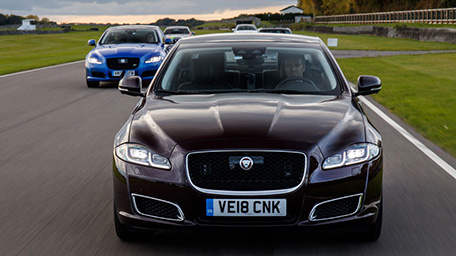 Professionally Callum is always looking ahead. Personally he's happy to indulge himself in what came before. He even brought his own XJC – the rare coupe version of the 70s XJ – to drive on the event. Sadly, the XJC didn't make it off the start line in England, but he's clearly enjoying the chance to immerse himself in XJ history. As am I. Given his appraisal of its retro looks, it's interesting to start in the X350. Here you encounter those aforementioned opposing forces: the forward-thinking aluminum construction (which inspired manufacturing techniques used by Jaguar to this day) and the staid styling. Like many of the heritage fleet examples here, this one is actually badged as a Daimler – to Jaguar what Maybach is to Mercedes. Jaguars were more white collar thank luxurious Daimlers, even though fundamentally they're the same car. This one's quintessentially English leather and veneer ambience is a cut above the average. The pixelated center display dates it badly but the driving experience is a delight, the supercharged V8 deliciously smooth and powerful while the aluminum body makes it feel surprisingly agile and light on its feet. From the ride quality to the seamless nature of the shifts and effortless refinement, the combination of sportiness and luxury is pure Jaguar. It's interesting to then switch straight to the current XJ50. This one's a Euro-spec diesel – Stateside it's a choice of a 340 horsepower 3.0-liter supercharged V6 or supercharged V8 with 470 horsepower. All US-spec XJ50s are long-wheelbase versions that start at $87,500 – a $3,000 premium over an equivalent Portfolio model. 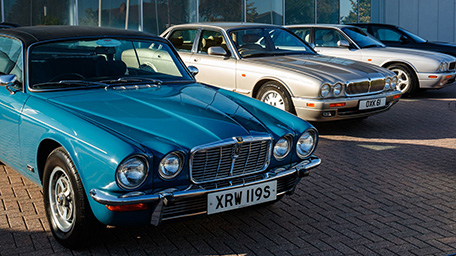 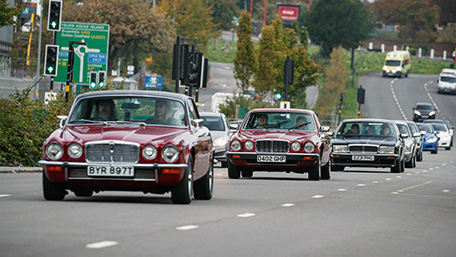 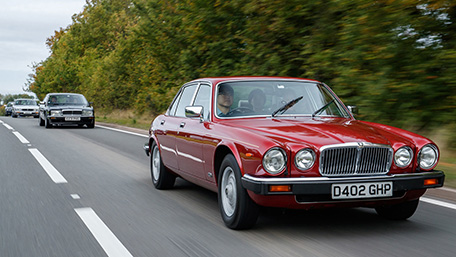 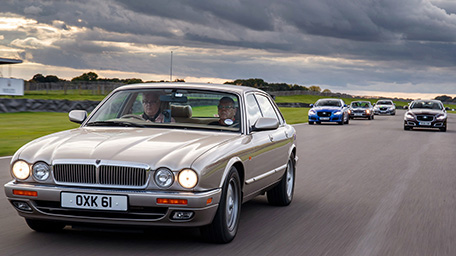 Where the XJ look evolved at a glacial pace in previous generations the current car still looks bold, especially in this company. But Callum's appreciation of the brand values means it's still faithful to the brand's distinctive sense of sportiness. A stronger hit of the same is the XJR575, with an uprated V8 shouting louder and delivering a proper performance hit. The idea of laying down some black lines in a luxury limo is a serious temptation the XJR575 will readily indulge. But I decide swapping to something a little more laid back: the 2001 XJ8. An evolution of the Ford-era XJ that first launched in 1994, the X308 introduced Jaguar's first V8 engine in place of the straight-sixes that had characterized the XJ from the start. This 240 horsepower, 3.2-liter version shows off a creamy blend of power delivery and fabulous ride comfort. Like its successors, there's also sharp, positive steering and a quietly sporty handling balance. The late-1980s XJ40 that preceded it shows what a big step the XJ8 was, even if it looked backwards for design influence. The XJ40's square headlights and delightfully kitsch digital displays were a departure in its day but, in driving terms, it feels like an old car, the 3.6 six in this Daimler version delivering relaxed performance. Perhaps appropriate, given its original owner was a funeral director with little need for speed. An overnight ferry lands us in France and me into my first taste of an even older XJ-series car: an XJC V12 coupe, one of just 1,855 built and therefore the rarest XJ on the trip. Its vinyl roof and tan interior is pure 70s, the skinny-rimmed steering wheel and three-speed transmission likewise of the era. Based on the '73 onwards Series 2, the coupes never shared the success of the sedans but it's a beautiful car and, pillarless windows retracted, a lovely way to enjoy the fall sunshine in rural Normandy. 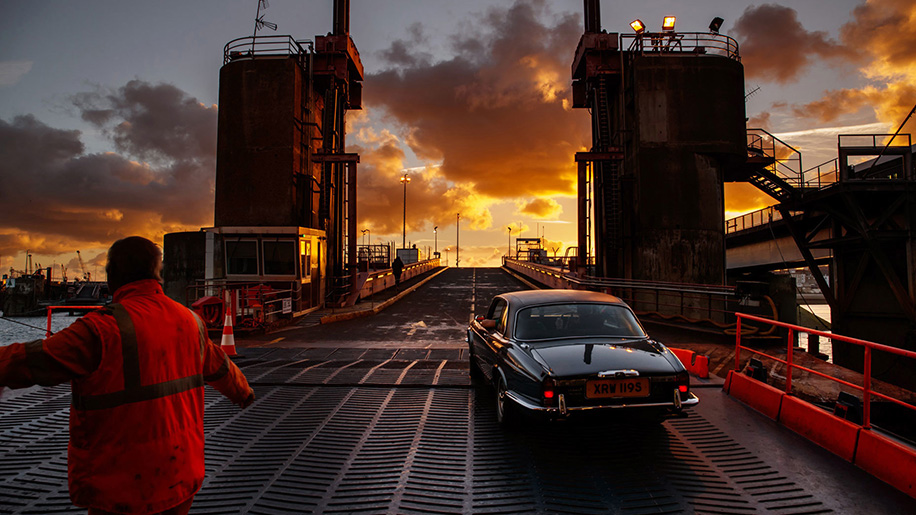 The delightfully named Daimler Double Six Vanden Plas Limousine I swap into after the XJC is a Series 1 car and has the same V12 motor. Whether this is just a better example or it's typical of the breed it's also got far nicer steering, with direct responses and a smoother ride on its longer wheelbase. The three-speed Borg-Warner has slipped into its top gear by 30 mph but pulls smoothly from there and little over 1,000 rpm, suddenly asserting itself above 3,000 rpm and towards three-figure speeds the damping can't quite contain. I settle back to 60 mph and 2,000 rpm, which feels more appropriate but does little to quench the engine's desire to drain both fuel tanks. As a child of the 1980s, I've been saving the best until last for the final stint into Paris. Launched in 1979, the Pininfarina-styled Series 3 XJ is, for me, the definitive Jaguar sedan. A plaque on the dash tells me this is the last 4.2 off the line in 1987, the straight-six delightfully smooth and the ride exemplary. It's interesting watching the XF Sportbrake camera car ahead bounce around over the bumpy French roads while the Series 3 wafts without a hint of wallow, the combination of slim pillars and direct steering encouraging a spirited driving style the chassis is happy to deliver on. An '80s trip computer – likely an expensive option – is the only modern intrusion into an otherwise traditional cockpit of cream leather and walnut. When, at the conclusion of the trip, Callum polls participants on their favorite, the Series 3 is my automatic pick. What's his? The answer is simple and on-message. "The next one..." 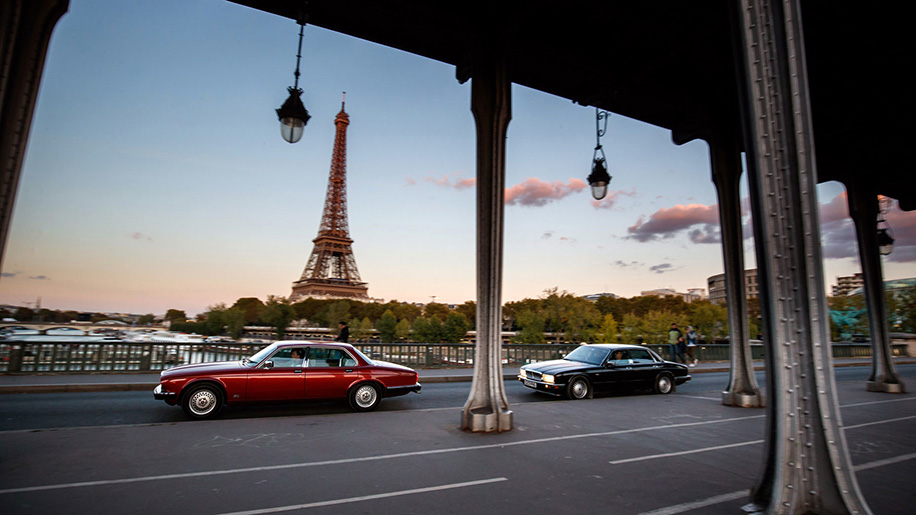 There are currently no comments for Jaguar XJ50 Road Trip Review | Driving the XJ50’s history.